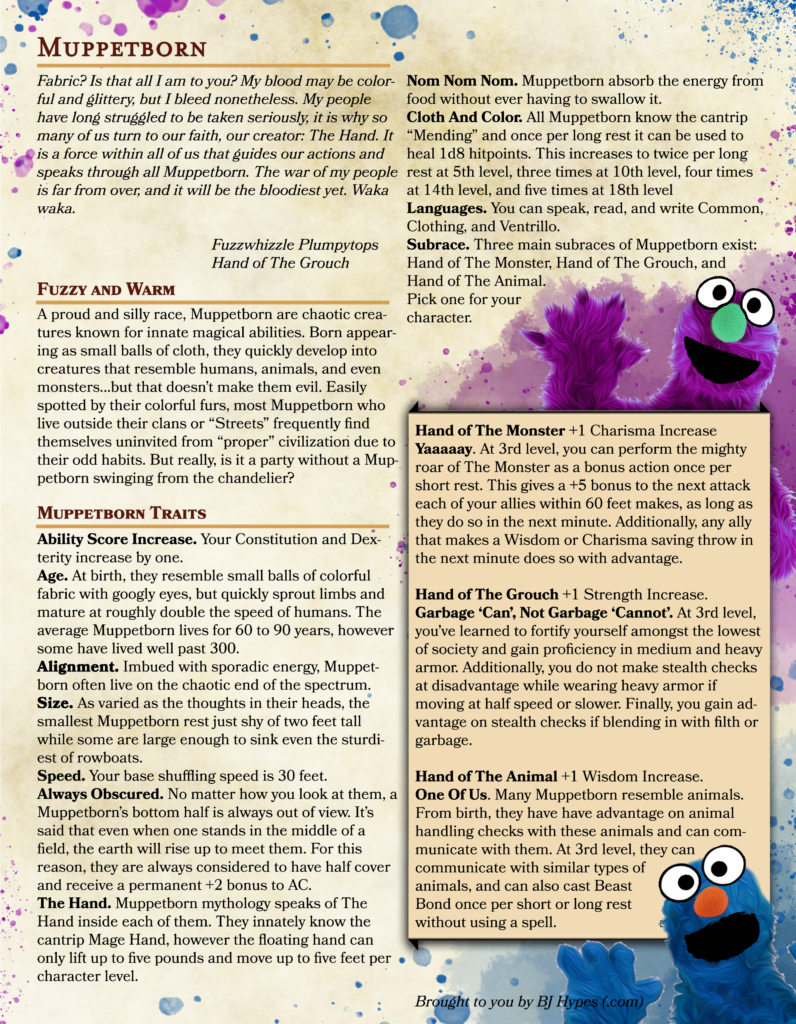 Fabric? Is that all I am to you? My blood may be colorful and glittery, but I bleed nonetheless. My people have long struggled to be taken seriously, it is why so many of us turn to our faith, our creator: The Hand. It is a force within all of us that guides our actions and speaks through all Muppetborn. The war of my people is far from over, and it will be the bloodiest yet. Waka waka.

A proud and silly race, Muppetborn are chaotic creatures known for innate magical abilities. Born appearing as small balls of cloth, they quickly develop into creatures that resemble humans, animals, and even monsters…but that doesn’t make them evil. Easily spotted by their colorful furs, most Muppetborn who live outside their clans or “Streets” frequently find themselves uninvited from “proper” civilization due to their odd habits. But really, is it a party without a Muppetborn swinging from the chandelier?

Hand of The Monster +1 Charisma Increase

Yaaaaay. At 3rd level, you can perform the mighty roar of The Monster as a bonus action once per short rest. This gives a +5 bonus to the next attack each of your allies within 60 feet makes, as long as they do so in the next minute. Additionally, any ally that makes a Wisdom or Charisma saving throw in the next minute does so with advantage.

Hand of The Grouch +1 Strength Increase.

Garbage ‘Can’, Not Garbage ‘Cannot’. At 3rd level, you’ve learned to fortify yourself amongst the lowest of society and gain proficiency in medium and heavy armor. Additionally, you do not make stealth checks at disadvantage while wearing heavy armor if moving at half speed or slower. Finally, you gain advantage on stealth checks if blending in with filth or garbage.

Hand of The Animal +1 Wisdom Increase.

One Of Us. Many Muppetborn resemble animals. From birth, they have have advantage on animal handling checks with these animals and can communicate with them. At 3rd level, they can communicate with similar types of animals, and can also cast Beast Bond once per short or long rest without using a spell slot.